The redevelopment of a pedestrian bridge blends design and functionality

The construction is characterized by a dual nature: on one hand, this is an independent, monumental, light and luminous space; on the other, we are speaking of a functional element within a city, which reduces distances and allows for improved crossing of the road.

The new pedestrian bridge in the Shuiwei disctric of Shenzhen, a metropolis located near the border with Hong Kong, in the Guangdong province and now home to numerous technological companies, features roofing solutions in zintek® titanium zinc from The Colored Ones line, in the “Natural earth brown” hue.

This is not just a pedestrian bridge, but a futuristic structure featuring a central walkway body and two complementary lateral structures that give birth to a large H-shaped construction. The intervention by Zintek contributed to the harmonious blending of spirituality and physicality, the two inherent souls of this project by world-renowned Chinese architect Fan Tie, where design takes center stage.

This operation has allowed Zintek to further consolidate its position in the Far East, where the company has been present since 2018, when it opened its showroom in Shanghai.

An umbrella-shaped structure to admire the view 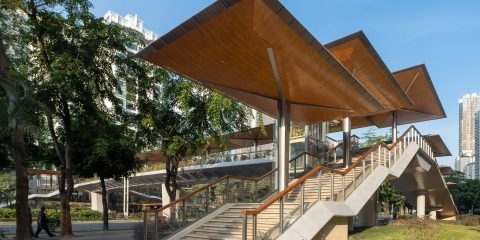 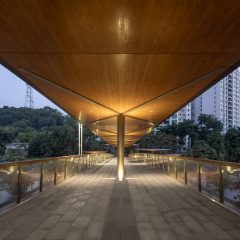 The titanium zinc roofing solution, supported by a single-column umbrella-shaped structure, allows pedestrians to cross the bridge in safety while simultaneously enjoying an unobstructed panoramic view on both sides. At nighttime, the bridge is illuminated by light beams that, intersecting with the columns, create suggestive light and shadow effects.

The construction of the Shuiwei pedestrian bridge actually redevelops and integrates the pre-existing structure, and this entailed a series of problems when adjusting the new construction to previously installed pipelines and columns. 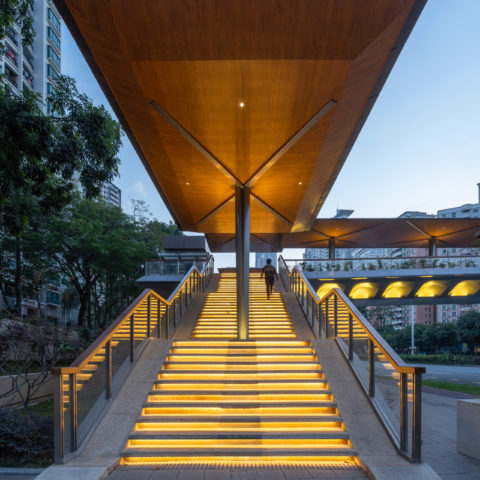 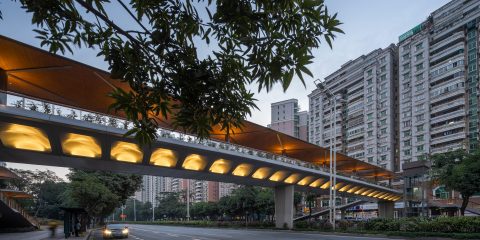 The zintek® titanium zinc roofing solution was designed to emphasize and highlight the lightness of the roof structure. The edge of the zintek roofing “umbrellas” was tapered and bent to meet the false ceiling, thus creating a series of narrow borders that delimit the wooden false ceiling.

zintek® slabs with hidden sub-junctures were used to build the border frames, while the roof covering is made of specifically profiled double-seamed zintek slabs. These slabs are fastened to the structure with a series of hidden metallic clips, which are in turn screwed to the substructure. The profiled slabs are hooked to one another and to the fastening clips via a specific bending process (double seaming). The system is designed and built to allow for thermal and transversal expansion of the material. 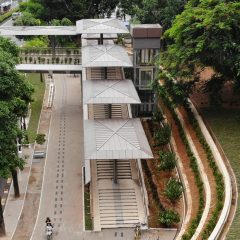 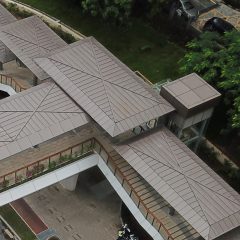 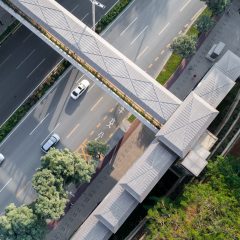 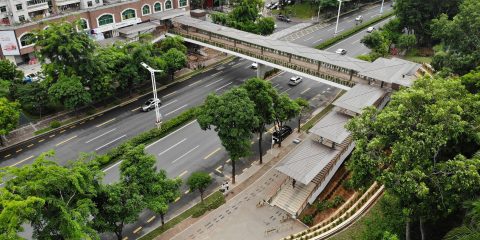 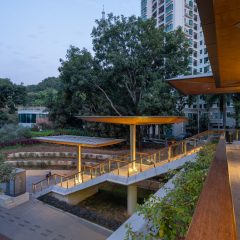 Zintek worked to respect for the original structure, adjusting operations to the context and to the needs of the client.

The company contributed to create a drainage system designed for intelligent use of rainwater, and furthermore proposed a winning solution for the color of the material, which blends in perfectly with the surrounding landscape.

The “Natural earth brown” hue is indeed a tribute to the color of earth, of the soil that sustains forests and cities alike; this is an eco-friendly solution, as it refers to everyone’s responsibility when it comes to the well-being of the planet.

Care and aesthetic impact, signed by the architect Fan Tie

The structure was designed by Fan Tie, a world-renowend architect and the director of ATDesignoffice ltd. The project by the architect Fan pays attention to safety and functionality, but also to the aesthetic needs of the structure and its impact on the urban landscape, as evidenced by the care placed on many design details.

Indeed, according to Fan Tie, design cannot avoid its relationship with people: it should address their true needs and improve their liveability, especially in a municipal context. «Design – states Fan – begins with people and should find its completion alongside them.»

The pedestrian bridge in Shenzen is merely the latest in a series of projects designed by the Chinese archistar over the course of a twnety-year-long international career, many of which are now considered reference models for urban planning. His works also include the urban design of the East Lake Greenway in Wuhan; the redevelopment of the Yang Yuan district, also in Wuhan; the design of the Kaihua International Center offices in the Zhujiang New Town, in Guangzhou; and the architectonic planning and design of the Sany Zongzhi New Town in Changsha.

Fan Tie, a member of the Royal Institute of British Architects since 2002, studied in the South China University of Technology and obtained his degree from Gordon University in Scotland.

— interview with the architect

Elegance, functionality, beauty, innovation. The business model followed by Zintek has always inserted itself in the wake of sustainable architecture, capable of decreasing the environmental impact of construction works to the minimum, re-thinking itself as a tool for integration with the Earth and humanity alike. 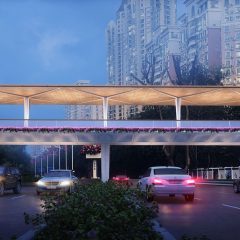 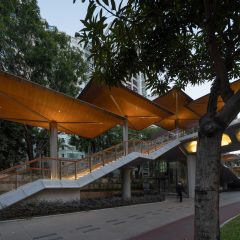 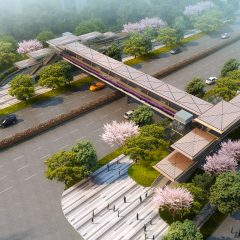 Energy savings and ethical approach are the keywords of the Venetian company’s modus operandi, which prioritizes the use of eco-compatible, long-lasting, recyclable and environmentally friendly materials, while simultaneously creating spaces that respect humanity, rewarding the quality of life of those destined to inhabit them.
Behind all works followed by Zintek is a strong sense of social responsibility, as well as unwavering faith in the actual possibility of improving the world through recovery, maintenance and improvement of the environment.

Thus, the company’s conception of architecture – as in the case of the pedestrian bridge in Shuiwei – translates into uninstrusive and non-invasive works that are capable of enriching the territory that hosts them, triggering a virtuous cycle of beauty, harmony and authenticity, to the benefit of the people who inhabit them. Just as in Renaissance workshops, each building site becomes a place for innovation and experimentation, which Zintek leads in extremely natural fashion, thanks to the exceptional qualities of its titanium zinc alloy, i.e. malleability, durability and capacity to remain unaltered over time (one of the most appreciated qualities of the material).

Interview with the architect Daniele Rangone 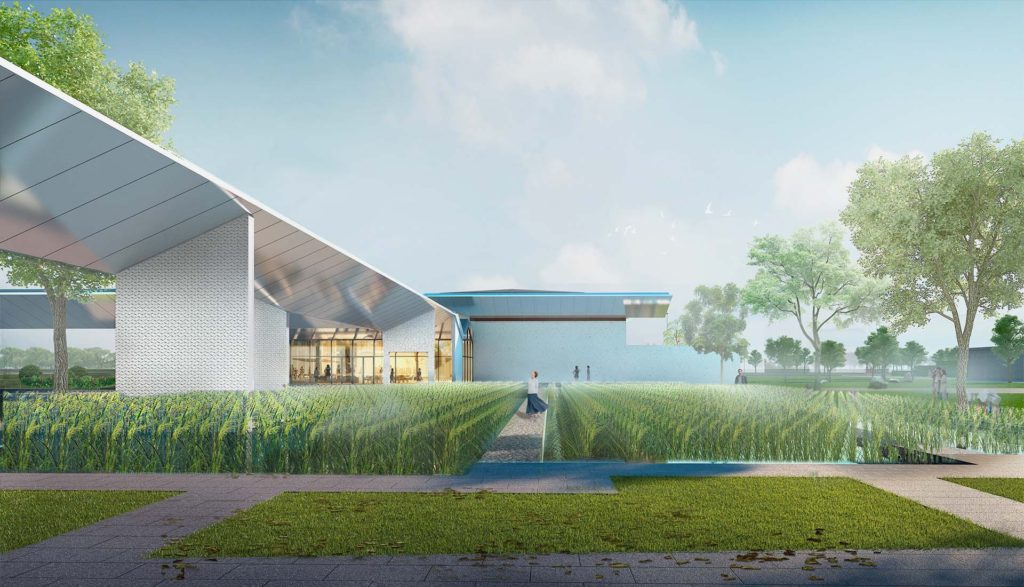 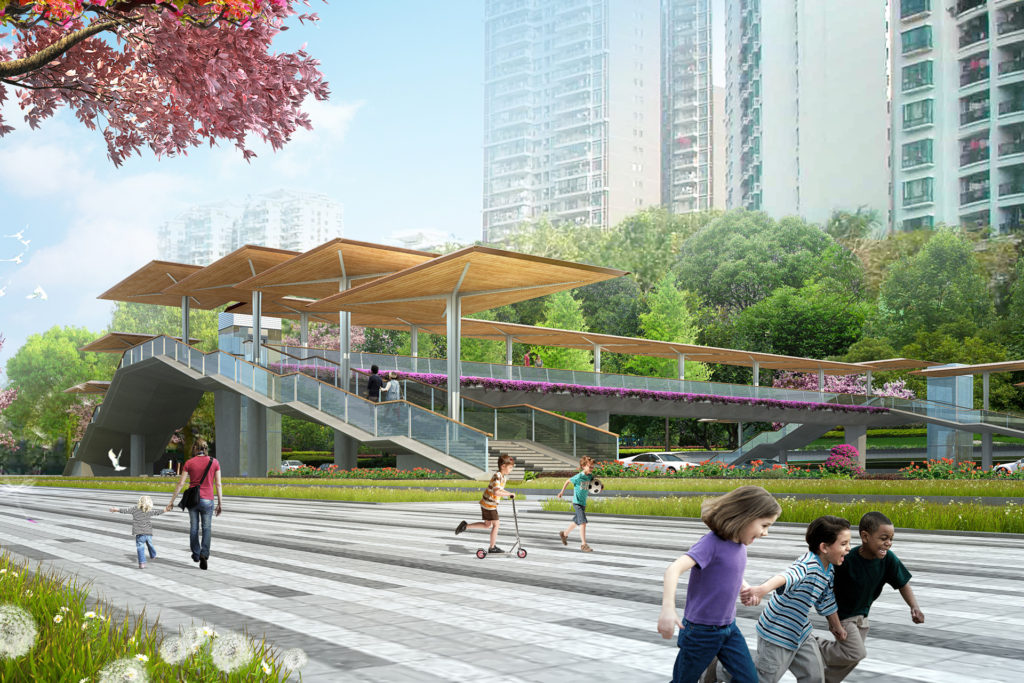 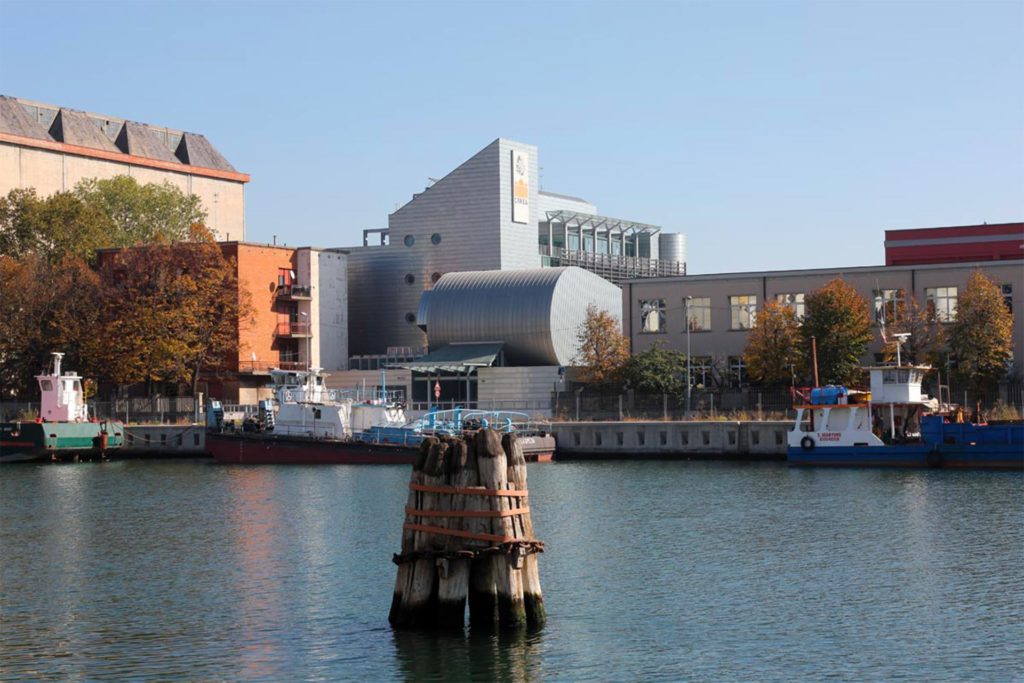 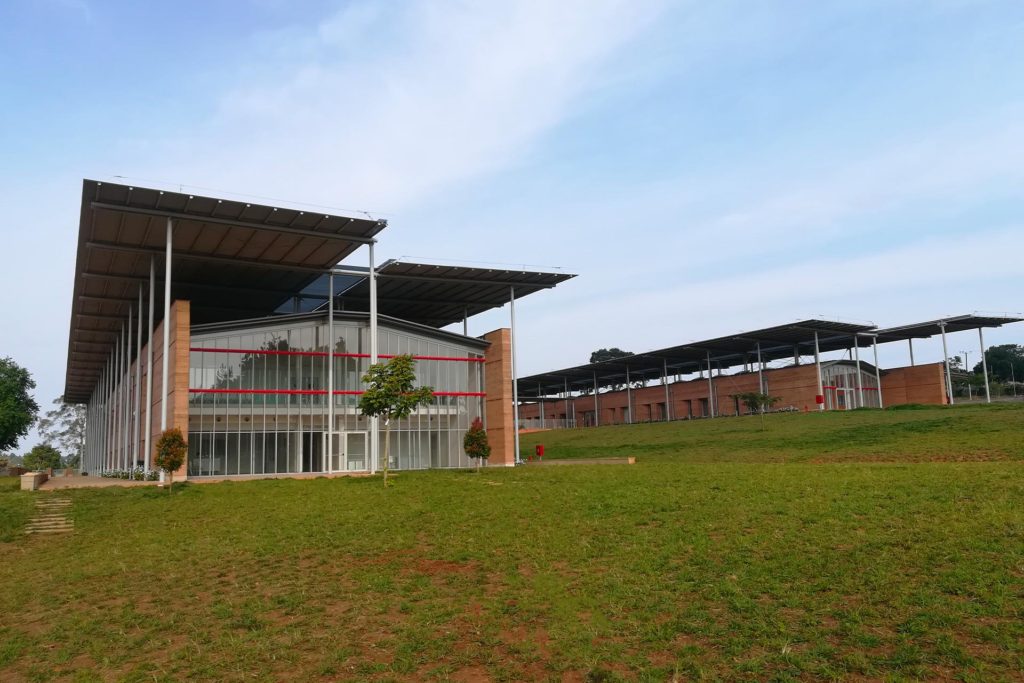 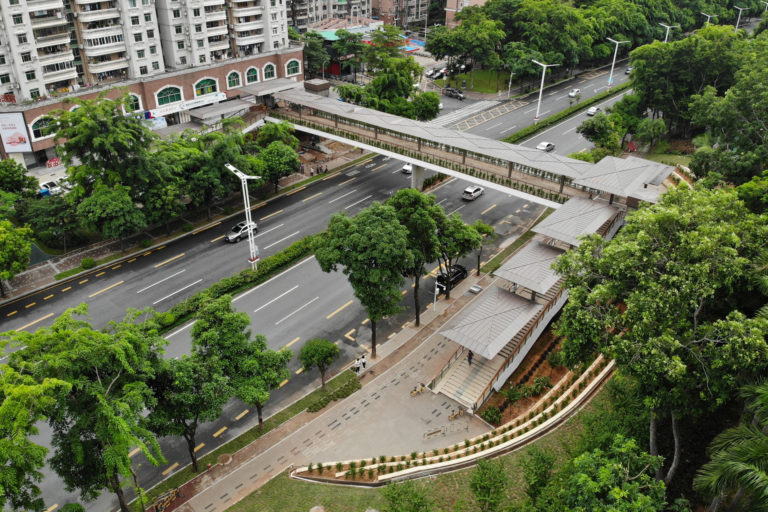 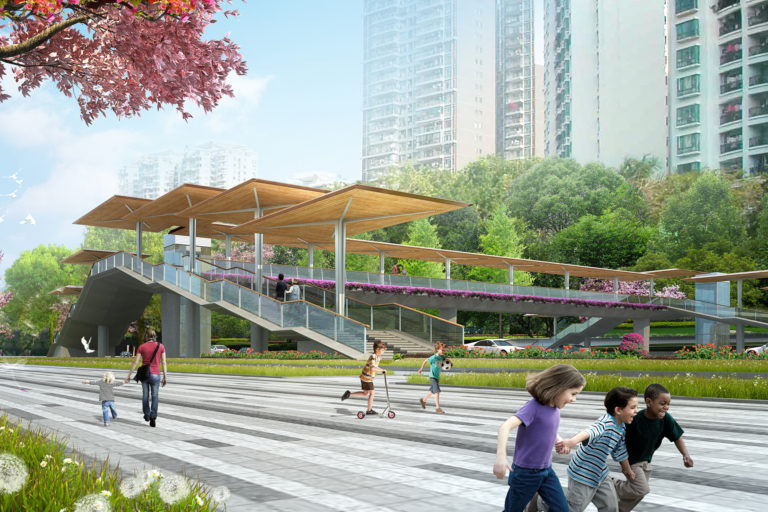 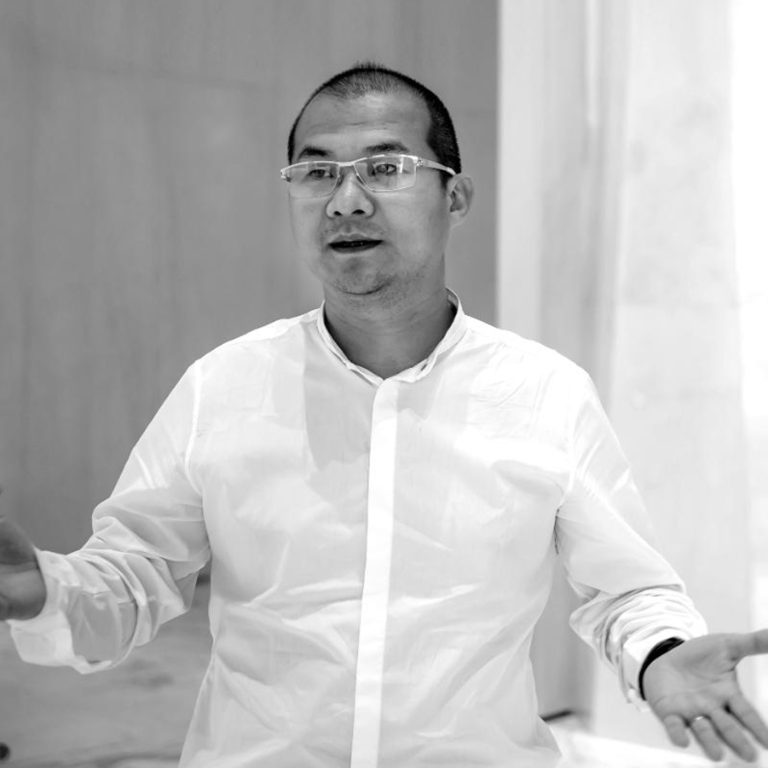