Restoration of the Shrine of Castel Dante
—

Home / Focus On / Restoration of the Shrine of Castel Dante

Conserving history allows us to look to the future

Zintek’s vocation isn’t limited to building the present, as the company also aims to protect and valorise the past.

The restoration operation on the Military Shrine of Castel Dante in Rovereto, one of the most significant monuments commemorating victims of the Great War in Italy, began in January 2019 and, following the interruption caused by the Covid-19 health emergency, will reach its conclusion around mid-June 2020.

In 2015, the restoration project was commissioned to the Trent-based architect Andrea Bonazza by the Superintendency for Cultural Heritage of the autonomous Province of Trent, upon instructions from the Ministry of Defence – General Commissariat for Memorials for the Fallen, which owns the monumental site.

Supervision of the works was assigned to the architect Manuela Baldracchi during the fall of 2018.

The teaminvolved in the project was a truly outstanding one: the Inco firm from Pergine Valsugana (the contractor company), with the surveying director Luca Conci and the worksite surveyor Luca Dellagiacoma, and the Pasquazzo e Perozzo firm from Scurelle (the subcontractor company for the tinsmithery works) with the master tinsmith Giovanni Perozzo and his son Roberto, aided by noteworthy technical support from Zintek, in the form of consultancy provided by technician Andreas Hofer.

The initial approach to the monument and the site aimed to gain knowledge of the architectonic system, from both a physical and material point of view, based on the design project signed by the architect Andrea Bonazza, and from the standpoint of architectural components that make a building transcend mere construction and elevate it to a symbolic status, transforming it into a document of the specific culture of an era.

The Shrine was borne of a war that required the sacrifice of thousands of young lives, yet it is a monument that looks to the future and calls for peace. 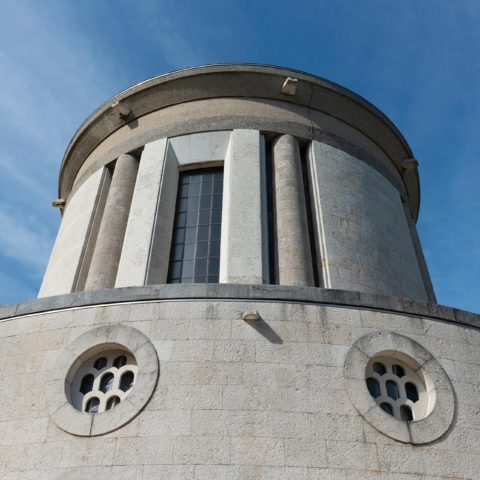 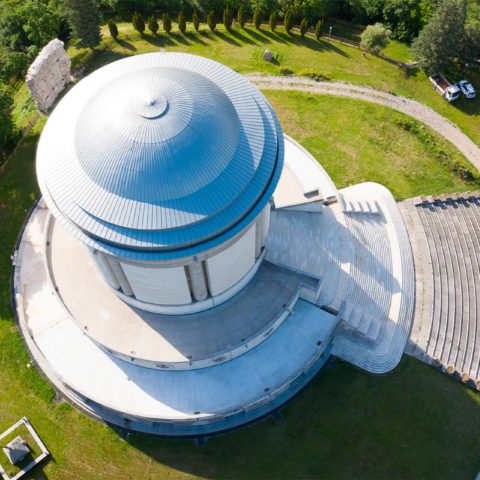 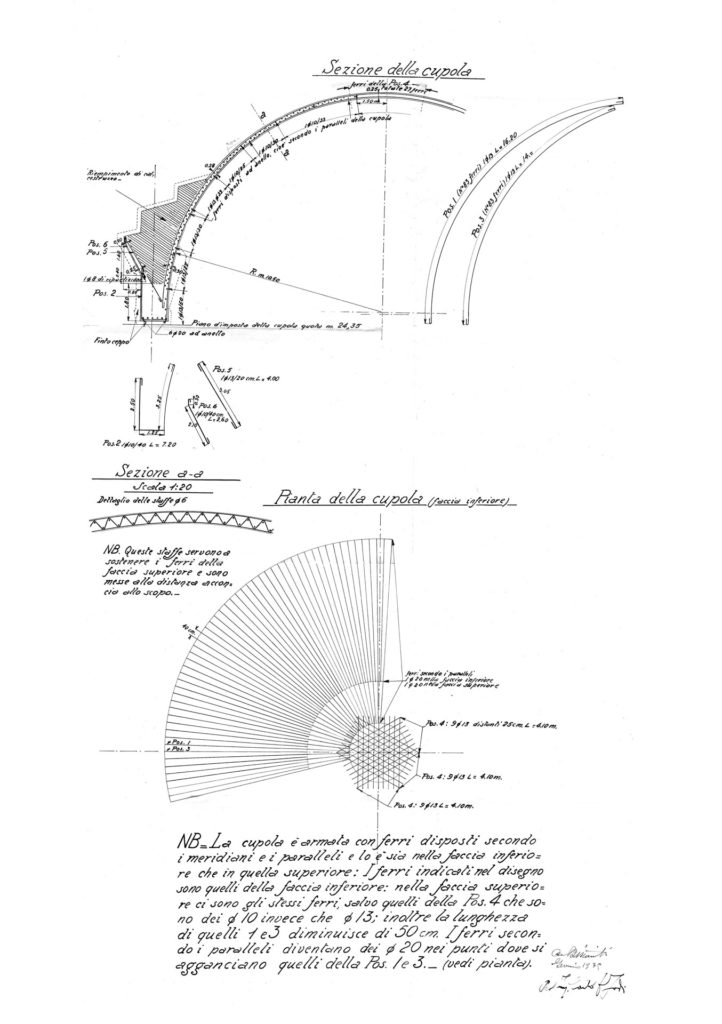 The structure rises on top of a hill, in a position that is fully visible from the entire Val Lagarina, alongside the hill that hosts the Bell of the Fallen. This location can only be reached on foot, by traversing a park and completing a short climb that points the visitor’s gaze towards the sky. Climbing the majestic steps to the monumental portal, entering the luminous hall surmounted by the cupola (and featuring the altars by Fabio Filzi and Damino Chiesa) and climbing back down the internal stairs alongside the three rings of the base, accompanied by the names of thousands of victims engraved on the cubicles: the whole experience is one that leaves visitors breathless, freezes time, enhances the feeling of being alive.

The perception of the symbolic fact is an extremely important phase, the basis for truly understanding the monument.

The project focused on three critical elements of the monument: the cupola, the windows and the terraces.

For the cupola, the architect Bonazza opted for full replacement of the roof cladding with an analogous one in titanium zinc, characterized by its long lifespan and low maintenance, installed on wooden planking with a ventilation gap and easily adaptable to curving surfaces.

The 7/10-thick zintek® titanium zinc rolled products, chosen not only for their guaranteed long lifespan but also for the matt colour that resembles the original material, were profiled along the concentric meridian ashlars of the cupola with initial spacing no greater than 105 cm, and installed by using a double seaming connection system. This system is well suited for a variety of architectural shapes, including cupolas. The water tightness of a seamed system is strictly connected to the slope of the roof. The height of standard seaming is 25 mm and derives from the upwards bending of longitudinal edges of the single slabs. Once the panels are connected, bending of the borders allows for angular seaming. Double seaming is the result of further bending of the angular seaming. 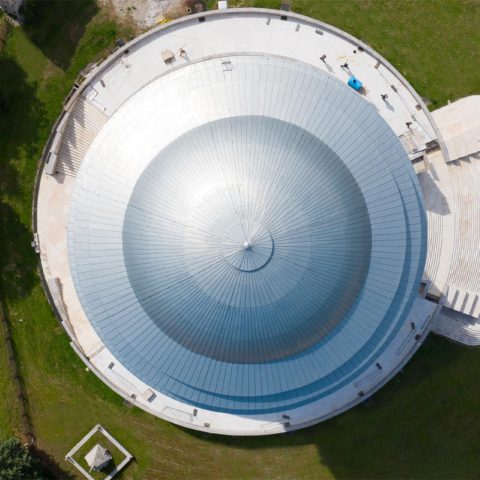 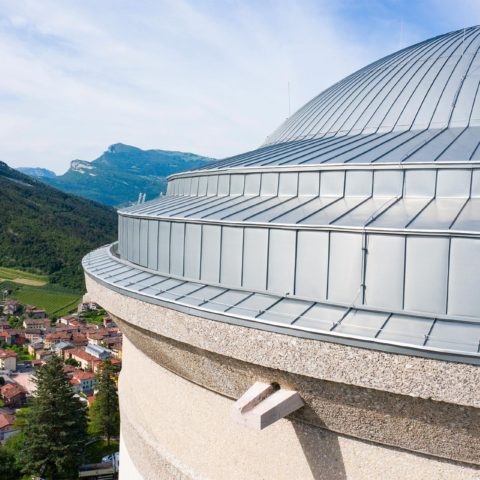 — Go to the Project Page

The metallic roof cladding and its substrate are separated from the cupola by a ventilated gap. The ventilated gap favours “ascending convective movement” and ventilated roofs can result in a lowering of temperatures during summer heat and improve thermal comfort below the roof.

The works were particularly complex as, in addition to the semi-spherical dome, the profile of the cupola also features tilted parts and vertical sections. The base coincides with the eaves channel, which is perfectly integrated in the roof. The question of expansion control was solved by using special hooks (consisting of two sliding units), previously designed by Zintek.

This detail, which may initially resemble a simple transversal connection, actually offers a double barrier against infiltrations thanks to the bending of the lower slab and the tinplate hooking strip. To avoid infiltrations over time, caused by a capillarity effect, the connection was also fitted with a draining mat layer. 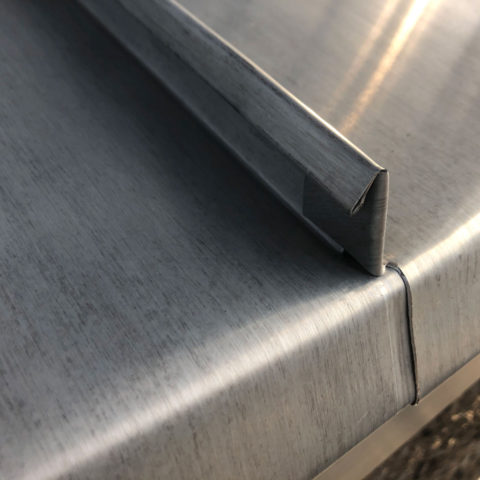 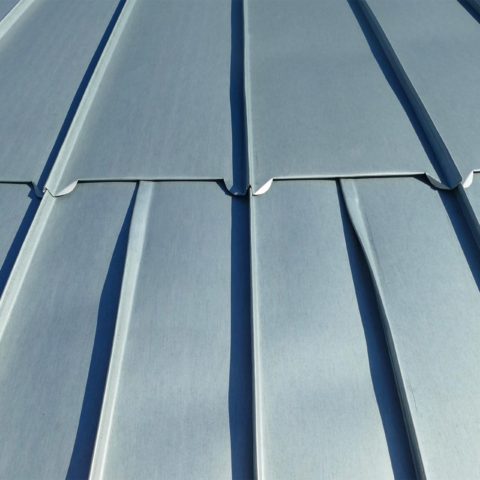 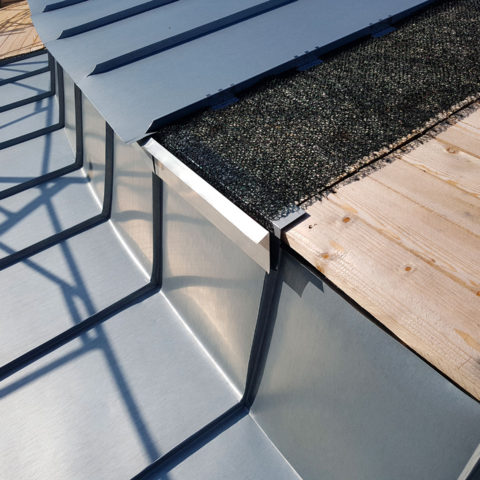 A key aspect of the project were all relations with the Superintendency for Cultural Heritage of the autonomous Province of Trent, with the Superintendent Dr. Franco Marzatico in his capacity of Sole Supervisor of the Procedures, with the architect Valentina Barbacovi and the surveyor Flavia Merz, technical officers from the Architectural Heritage Office, and with the Ministry of Defence – General Commissariat for Memorials for the Fallen, in its capacity of proprietor of the monumental site.

A PASSION FOR CRAFTSMANSHIP…

Tinsmiths are key figures in the construction world, somewhat closer to the figure of an artist than to that of a craftsman. Their professionalism, rooted far back in history, bears incalculable and truly tangible value.

The development of roofs such as the one built in Castel Dante is proof of the high value of master craftsmen, and simultaneously highlights the need for preservation of the one-of-a-kind profession of tinsmiths. 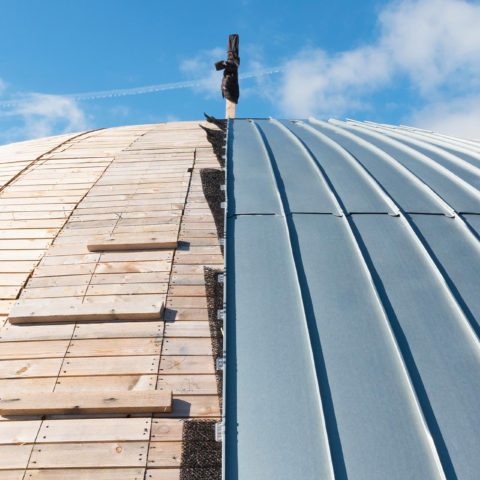 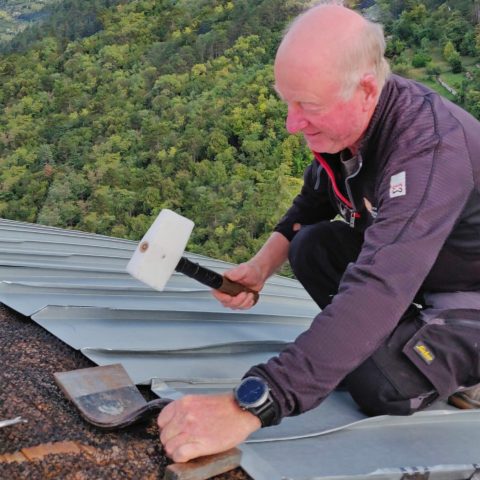 Two great added values emerge when observing the cupola: a material with high intrinsic value and a craftsman who determines its correct use. The combination of these two factors is the key element behind the life of the construction.

A synergetic collaboration of this kind is essential for the success of this type of intervention, i.e. when recovering one of the most important monuments of Italian Cultural Heritage from the first post-war period.

… IN A DIALOGUE AT THE SERVICE OF ART

Zintek has always collaborated with construction professionals and installation technicians, providing assistance in the worksite, installation instructions and acting as an institutional interlocutor when required.

The company enjoys an ongoing dialogue with the world of professional installation technicians and aims to valorise the expressive skills of tinsmiths thanks to the Academy located within its headquarters in Porto Marghera. 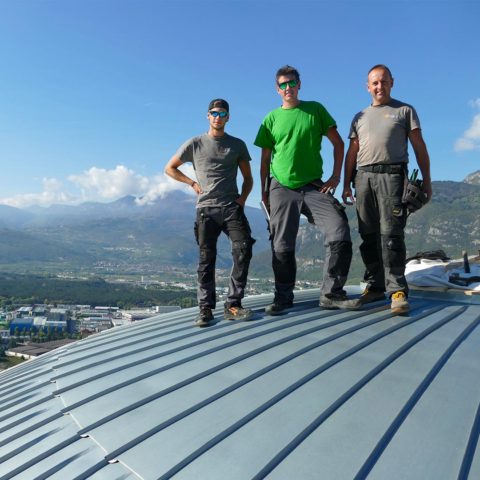 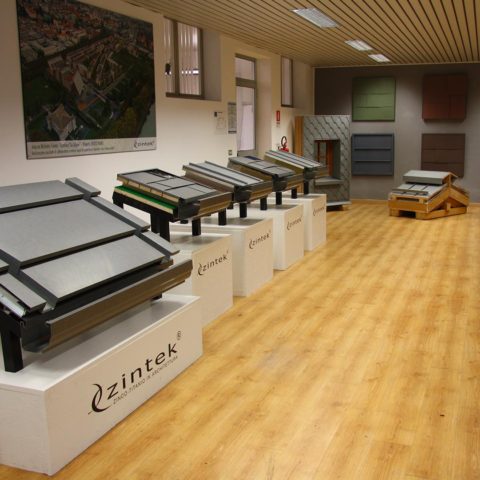 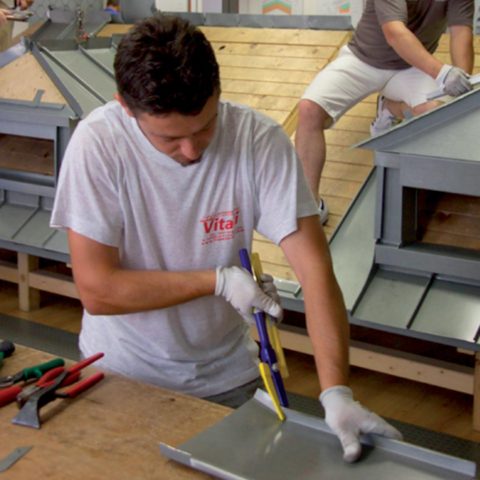 This is how Zintek participates in the art of tinsmithery, by conserving its know-how, conjugating it with new technologies, new contents, new methods and making these available to anyone aiming to grow in a craftsmanship profession that is essential for the very existence of any construction.

THE HISTORY OF CASTEL DANTE

The Shrine of Castel Dante is a monument to the fallen of the First World War, holding the mortal remains of 20,280 Italian, Austro-Hungarian and Czechoslovakian soldiers.

It was erected between 1932 and 1936 by the C.O.S.C.G. – Memorials for mortal remains of war victims, in the site of an ancient manor (Castel Dante) from which it took its name. 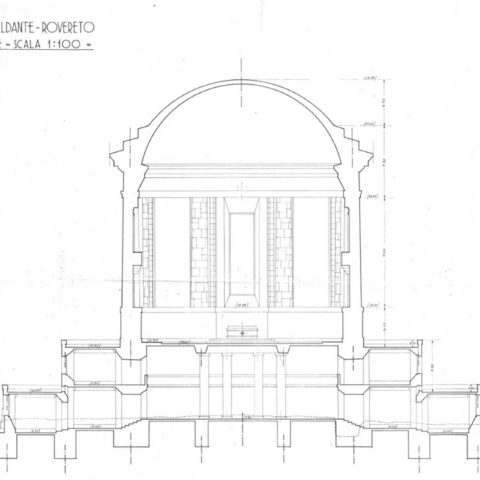 The final solution is a majestic semi-circular monument, built on a high base consisting of two large terrace steps destined to welcome the mortal remains of the fallen within cubicles arranged in the wall space of two galleries.

The slightly lowered cupola, built on a continuous cement conglomerate cornice, covers a large central hall conceived as wide, solemn and sober, in order to meet the needs of the great functions and glorifications, and hosting the mortal remains of the Rovereto-born martyrs Fabio Filzi and Damiano Chiesa in two juxtaposed grey marble arches.

In his project report, Biscaccianti wrote that the building must clearly honour its function through its architecture.

A sense of motion is transmitted to the cylindrical body by the introduction of eight columns in the wall structure, flanked by narrow embrasures that cast shadow effects on the otherwise flat surface of the wall, and by the addition of a monumental portal with an open triangular gable, surmounted by a large splayed window.

The focus on chiaroscuro effects is emphasized by the use of light-toned limestone as cladding, refined with various techniques to achieve increasingly smoother surfaces as the walls proceed from the base towards the cylindrical body. Finally, the technical choice to use a stepped cement cornice as base for the cupola adds a further plastic element to the construction.

The building was completed in April 1937 and the monument was inaugurated on November 4 1938. 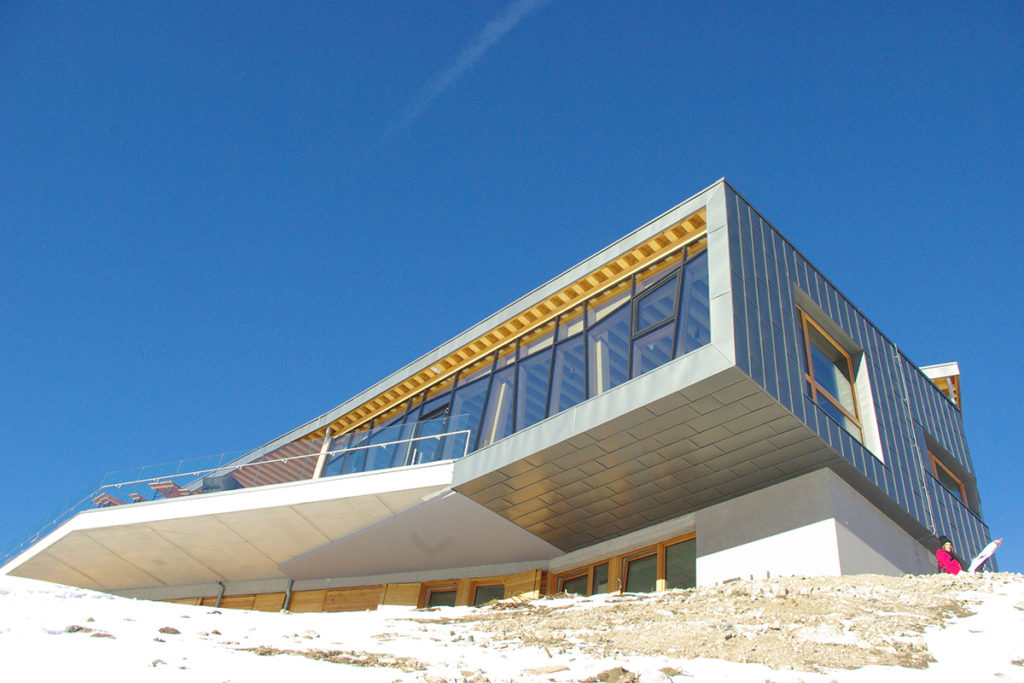 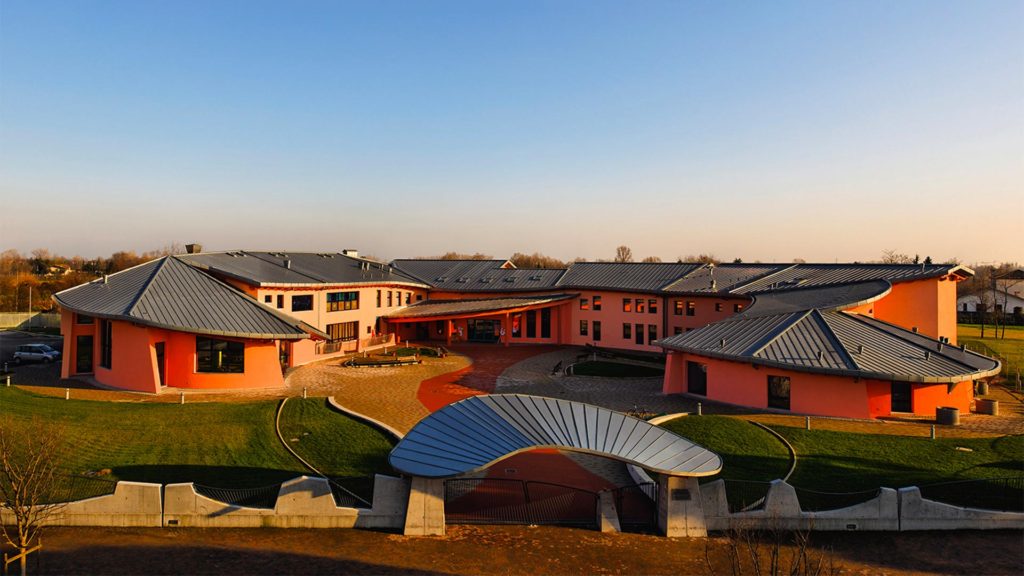 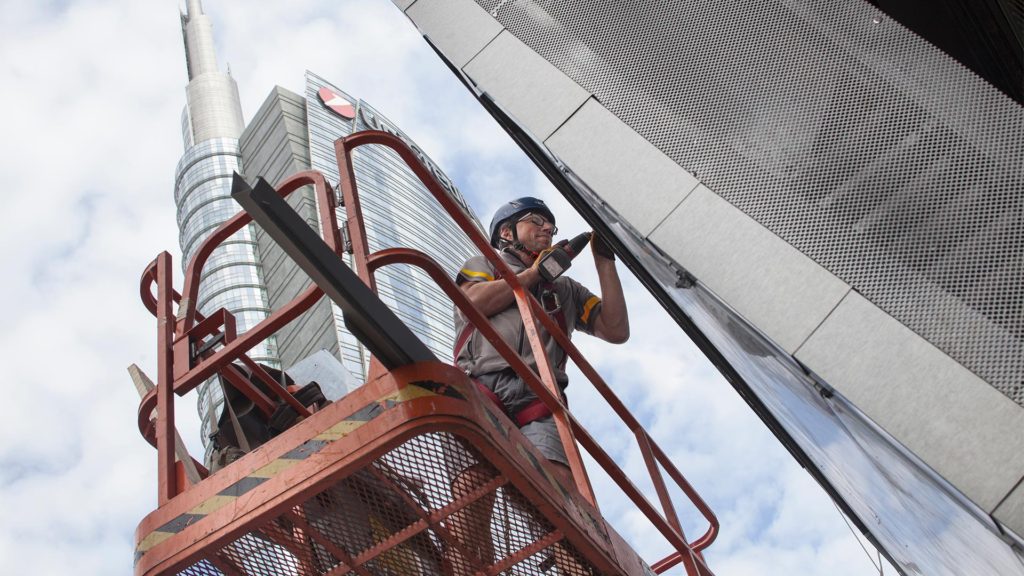 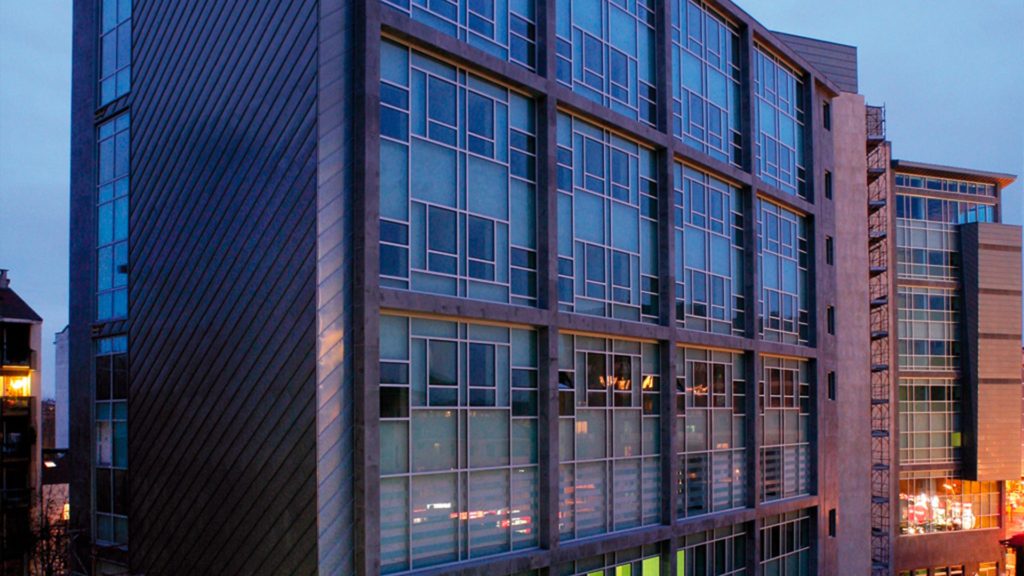 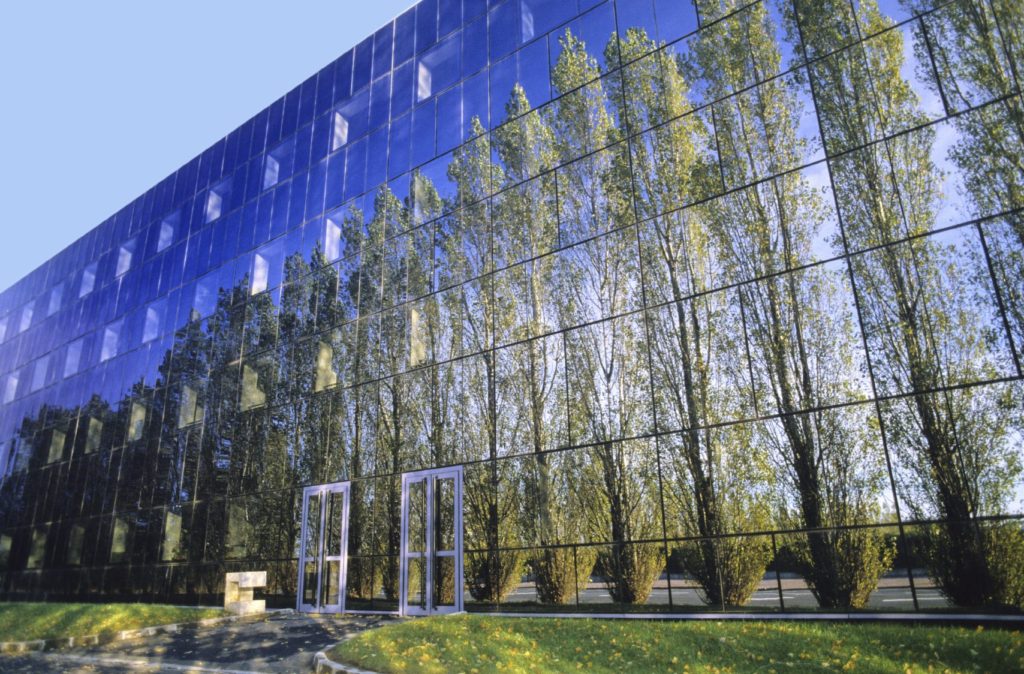 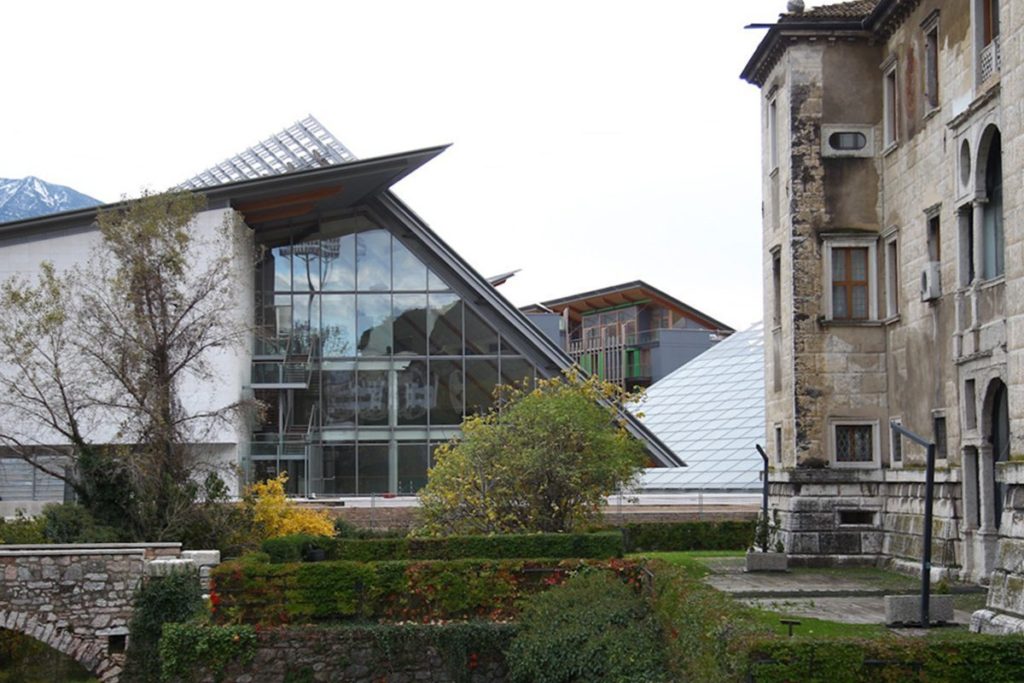 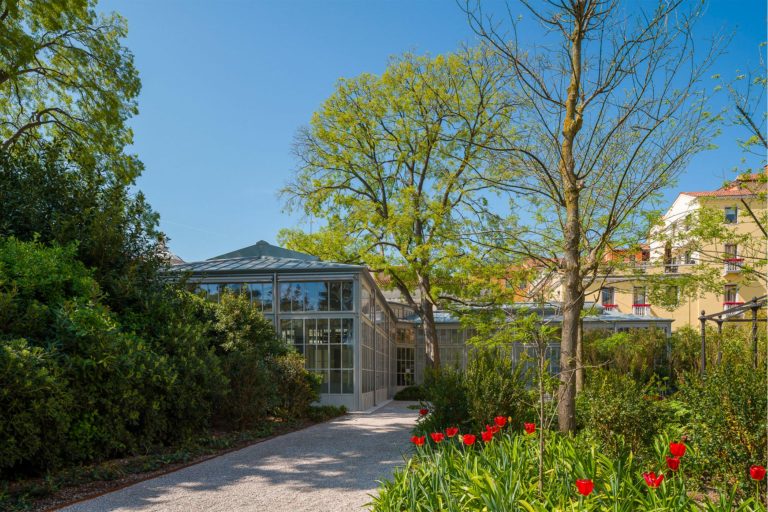 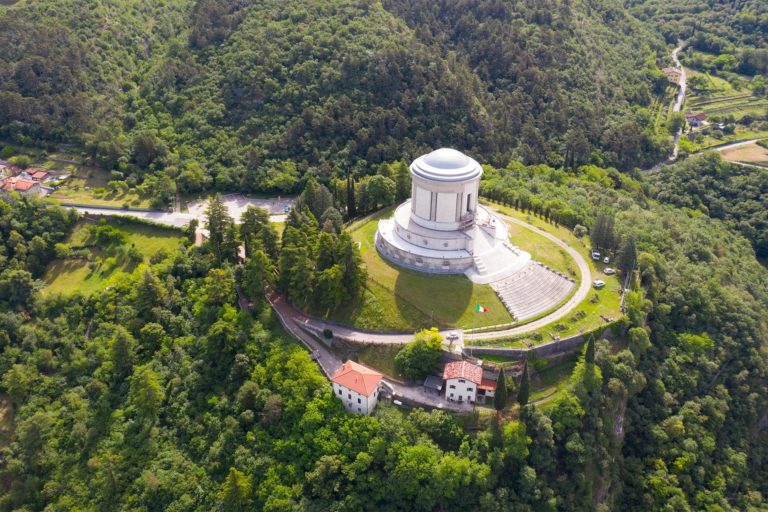 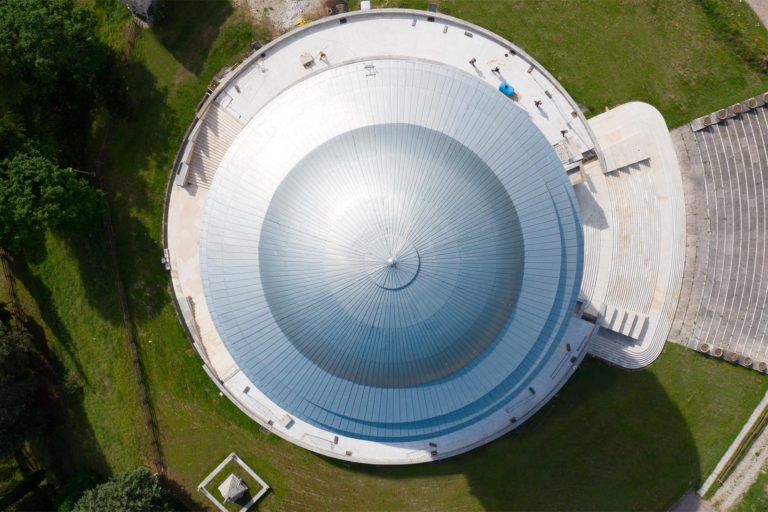 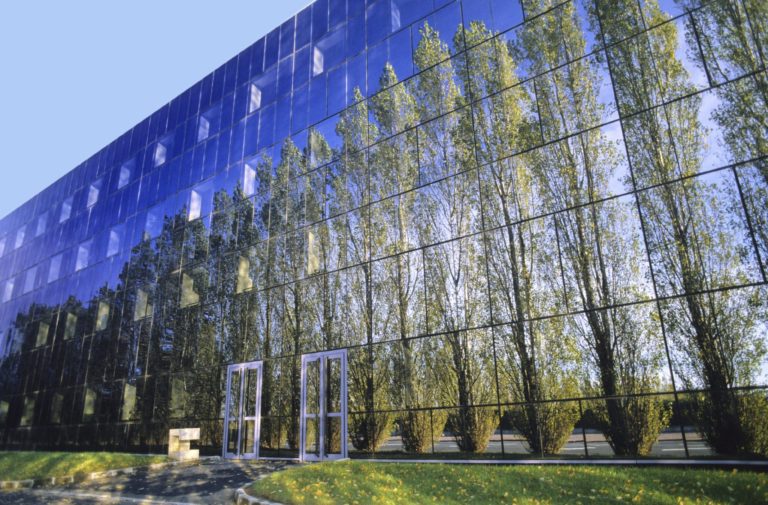